An interview by Tiziana Casapietra

Who is Corrado Levi?

Corrado Levi is a “king”.

Where did the idea for this portrait come from?

The portrait is a response to his wishes, it is a commission. We met in Salento on a residency with other artists. Corrado saw pictures of some of my large-scale ceramics. I believe that those images sparked off his desire.

Why is he playing the cello?

He chose to be portrayed while playing his cello. Such a commission is a rare opportunity, difficult to come by in current times, and one that I have always dreamed of. By pure chance some friends of mine with whom I had worked on other projects were also on that residency, (Giulia Di Lenarda, photographer; Amedeo Martegani, artist publisher; Federica Pamio, artist). Together we improvised a night set in the square of the Basilica of Otranto. The atmosphere that evening was unforgettable. The ceramic portrait stemmed from of one of the photographs of that nocturnal exhibition. 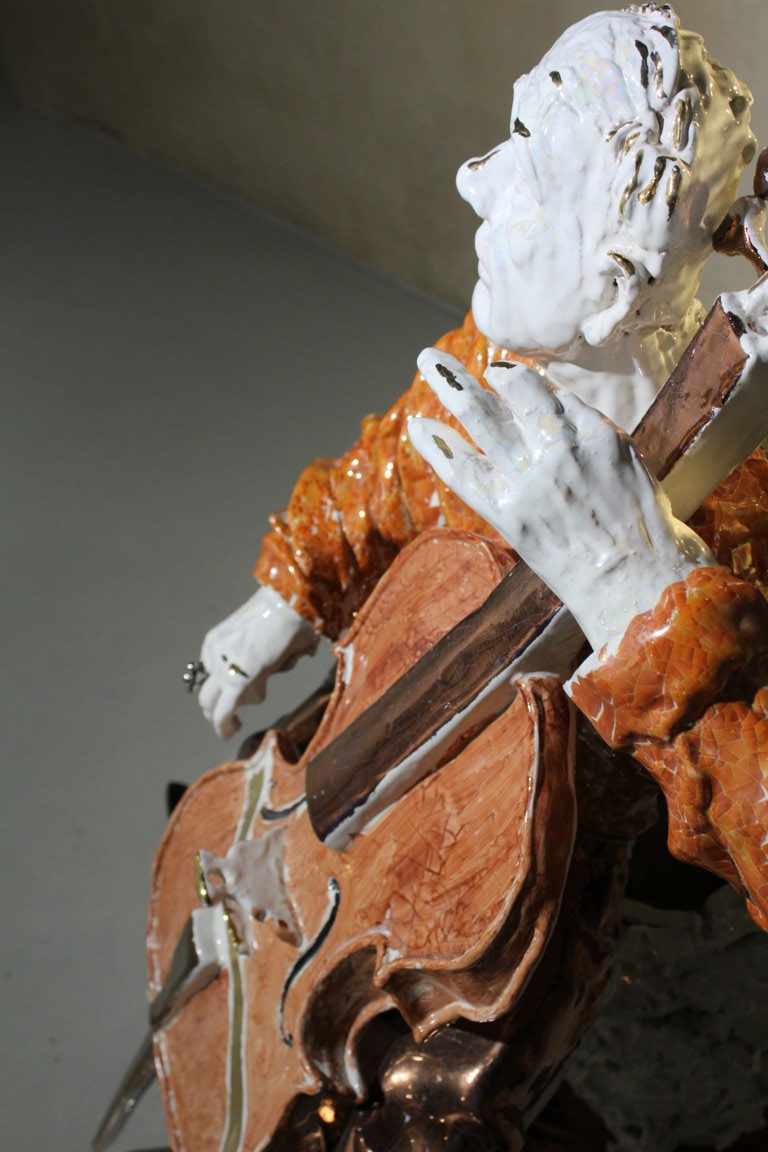 A detail of “Corrado Levi plays Cello”, by Vincenzo Cabiati (2014).

Why do you refer to “a rare opportunity, difficult to come by in current times”?

In earlier centuries, it was customary to commission portraits: particular works desired by the nobility, the church or more recently by the great bourgeoisie. I do not know of such customs in our times. This may even be due to a different role and path of the artist. I have always wanted to be able to see how I measure up in an unusual role. This portrait was my chance.

Tell me about that evening in Otranto.

As I recall, it was a succession of most unusual events “blessed” by chance. From discussions with the other artists who were there at Otranto, I had thought that the square of the Basilica in May, which was absolutely deserted at night, would be the ideal place for staging the performance. The architecture, the soft light reflected on the Lecce stone both on the facade of the Basilica and on the houses of nobles that surround the small oblique square immersed the scene in golden dimensions, added to the silence, and generated a super productive atmosphere where everything, as if by magic, contributed to the sequence of photographs taken, which were then documented in a book. One of these photographs, one in which Corrado, while playing, turns his gaze upwards parodying a mystic pose, became the starting point for the portrait.

The light in the work is one of the most significant factors of the piece.

The golden “blade” behind the figure of Corrado is an attempt to intensify and refract the light that fell from higher up onto the Basilica’s yellowish facade of Lecce stone. The choice to use metallic colours of gold and pearl (on the third firing) on the figure fits in with my aim to push the scenic lighting to its limits and superimpose them on to that as well as onto the protagonist.

Corrado, how does seeing yourself portrayed in this way, being interpreted somehow in a profound way through Vincenzo Cabiati’s ceramics, make you feel?

I am thrilled by the way Vincenzo Cabiati has managed to make my deep notes shine so brightly. Another dimension!

Take a look to the other interviews