The term “taches noires”, coined in 1809 by the prefect under Napoleon in the Montenotte Department, Chabrol de Volvic, refers to terracotta pottery made for the tables of the lower classes, produced in Albisola starting from the 1730s.

The production of these ceramics, which counted many millions of pieces per year, was widely commercialised in Italy and along the coast of the western Mediterranean. This type is distinguished by its extreme decorative simplification consisting of a small number of dark-coloured stains (hence the name “taches noires”). Indeed, it is characterised by the simple decoration of informal motifs, castings, diagrams, and stripes, made in manganese and drawn with broad brushstrokes under the ferrous paint in orange or brown. These terracottas included various shapes which were sometimes produced using the moulds previously created for the maiolica. Specifically, the production ranged from common plates to pans, “scaldini”, strainers, tankards, oil-lamps, candlesticks, and veilleuses, while also including holy water fonts, small sculptures, and statues for devotional use. In the second half of the 18th century, the “taches noires” were joined by the production of the so-called “terraglia nera”, which was glazed in manganese brown. In the pieces destined for the tables of the lower classes or to decorate the homes of the bourgeoisies (“scaldini”, trays with railing edges, oil-lamps), we see the same forms as in the “taches noires”, while there is also evidence of a limited production of objects embellished with golden highlights. This type of production also included small plastic items and allegorical groups with a Neoclassical mark, often derived from “bisquit” and pottery and inspired by English models.

These ceramics are shown in room 7. 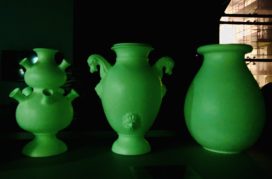 What does it happen in the rooms when people go away? (Hydria, Jar and Tulip Pot)… 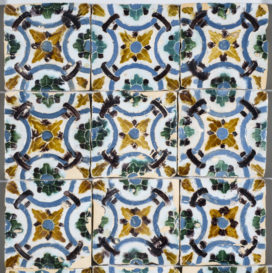 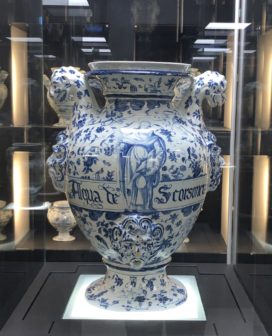 The Pharmacy of the ancient Saint Paul Hospital in Savona…